These set appears to offer yet another set of racial stereotypes–but not, this time, aboriginal ones: 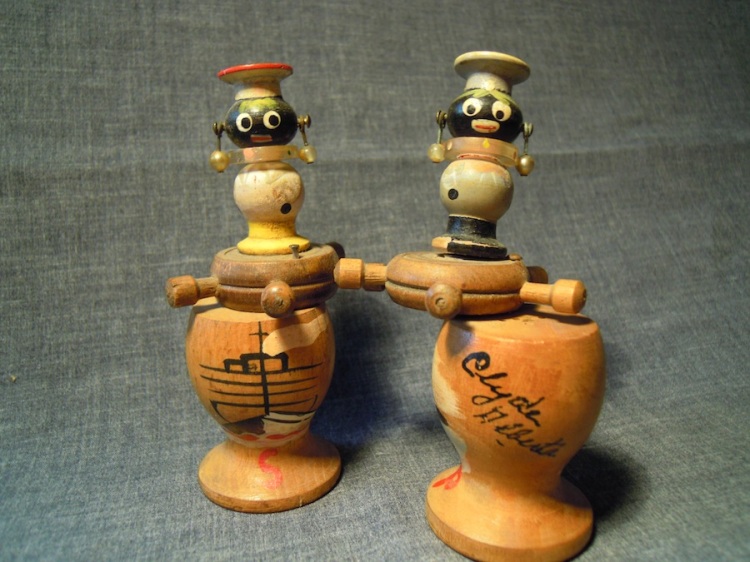 The pitch-black skins, the big round eyes, the thick lips, the overall roundish dehumanizing cuteness–these are, it seems, a version of the standard classical caricature of people of African descent.  Much like the one in this old advertisement: 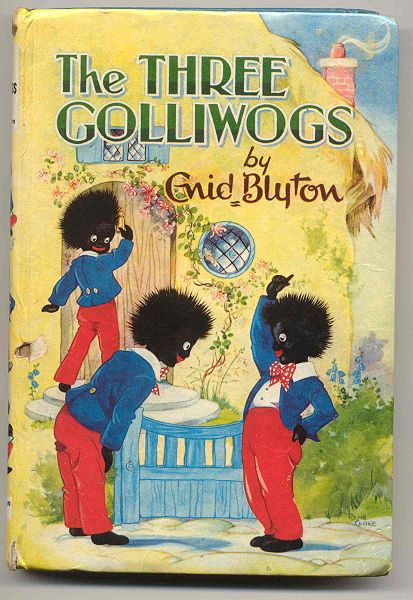 The figures on these shakers are just as offensively stereotyped as these old images are.

But I’m actually kind of hesitant about identifying the figures on the shakers as black stereotypes, for a couple of reasons.

First, the shakers have a kind of nautical feeling about them.  The figures appear to be wearing sailor hats, they are standing on what appear to be ship’s wheels, and the image on one of the shakers appears to be representing some kind of boat or ship.

But second, why do they represent ships–and why, for that matter, would they be representing people of colour–when they claim to be souvenirs of a place called Clyde, Alberta: 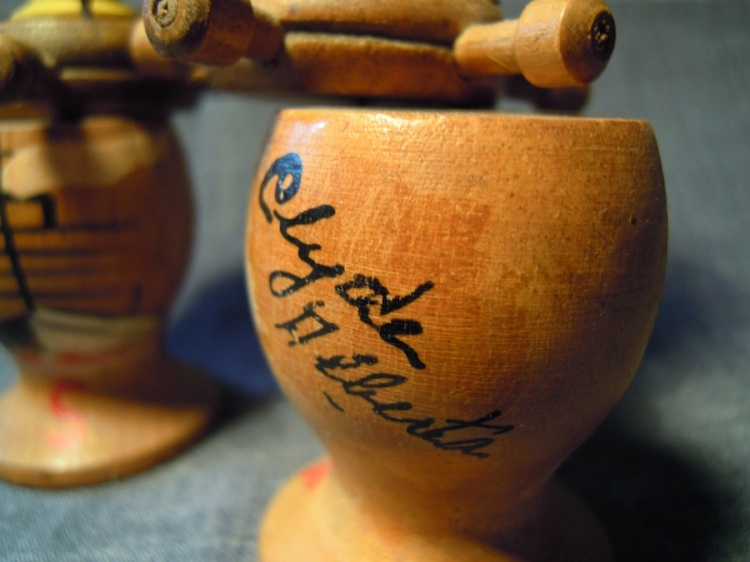 I don’t know much about Clyde, Alberta, but I do know that it is a very small village north of Edmonton on the bald Canadian prairies–nowhere near a body of water where any sailors, especially any African-seeming ones, might ply their trade.  I asked my brother Joel, who lives not far from Clyde, if he knew of any nautical connection the place, or if he had any knowledge of its connection with sailing, and he told me this:

No idea.  Clyde is a really tiny village on the bald ass prairie.  They are primarily a farming community and they are slowly shrinking into a ghost town.
And I really have no idea why the sailor would be black.  Up until the recent influx of immigrants from Africa here in Edmonton, I don’t think there was ever an African American within 500 miles of the place.  A Ukrainian theme I might understand.  Perhaps some French Canadian.  But a black sailor – no idea.  Maybe they got a sale on discontinued salt shakers.  In that kind of small Alberta town – thrift I understand.

So perhaps it is just thrift.  After all, these shakers consist of various kinds of wooden beads and plastic buttons glued together–a kind of making something sort of useful out of leftover remnants, perhaps; what Claude Lévi-Strauss identifies as bricolage?

But then, I realize, there is a sort of seagoing connection, at least in the place name:  Clyde in Alberta might have been named after the river Clyde in Scotland, the banks of which  in and near Glasgow were the centre of the British shipbuilding industry for many decades.  So it’s possible to imagine some retired shipbuilder, perhaps very grimy from years of toil in the shipyards, being a founder of the town and memorialized here.  Or maybe a wealthy shipbuilder retired to Clyde and brought some of his former slaves along with him?  Or perhaps the stereotypically thrifty Scot who named the place got a good deal on leftover shakers from some town in Mississippi.  I don’t know.  And one way or the other, why are the sailors wearing pearl earrings?  Are they pirates?  Are theyAfrican-American  drag queen sailors lost on a spree in the wilds of Alberta?  It remains a mystery.

One other thing that I forgot to mention; the ships wheels on which the figure stand move sideways to reveal the holes the salt and pepper come from.  So these are a set of shakers with moveable parts–shakers moving into the category of toys, then.  I have just a few other pairs that move in various ways also.