In previous posts, back in March, I tried to come to grips with my responses to the sets of shakers in my collection that depict Native North Americans.  I began by saying of one pair that “It’s that rendering of the toxic as perfectly harmless that most fascinates me about them.”  Later, I described a set representing aboriginal children as “too cute to be offensive, surely–unless we start think about how offensive it is to make them so cute, so harmless, so barely human.”  My basic response, then, was a squeamish revulsion to the dehumanization of the subjects these shakers supposedly represented, a squeamishness that seemed to be being deflected by the miniaturized cuteness and Edenic shininess of the depictions.
I have that response in an even more intense way to a shaker set representing a different racial stereotype:

This is a version in highly glossy earthenware of two characters out of advertising lore: Aunt Jemima, who has been the public (albeit changing) face of a manufacturer of ready-made pancake mixes and pancake syrups for well over a century, and, as represented in paper dolls and other ephemera produced by the pancake company, her husband, Uncle Mose.  In fact, this set was at one time sold by the pancake mix company.

They are an entirely obsequious pair, she offering up what might a plate of pancakes tucked under her capacious bosom, he with his hat in the hand and happy to oblige.

This is a particularly crude version of this happy pair; others found on various auctions sites and collector’s pages on the internet show them with more clearly defined facial features, and with the plate of pancakes more obviously a plate. 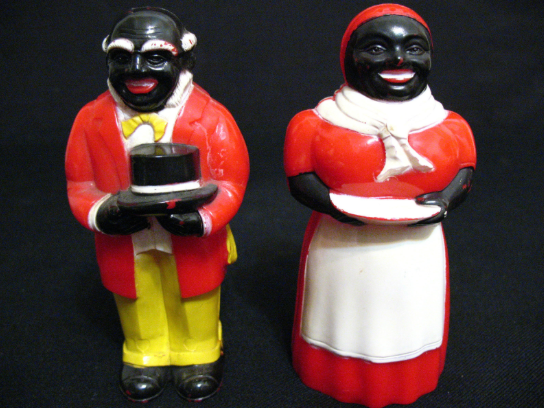 But the crude broad strokes of their depiction in my set of shakers merely offers a slightly more obvious and exaggerated version of the stereotypes these characters always represent–and as such, a paradigmatic version of the essential and essentializing African American stereotype: a dark brown face with white dots for eyes and a broad hump for a nose and a bright red line for lips. These features are so generic that the only difference between Aunt Jemima’s face and Uncle Mose’s in my set is the white lines outlining his eyebrows.  This is the stereotype in shorthand–a few broad strikes that act less as reminders of the kind of people they supposedly depict than as reminders of the already circulating and taken-for-granted stereotypes of such people.  They are cartoons of cartoons.

So what is the stereotype, then?  What does it want us to think about African Americans as a type?  First, obviously, there ARE a type, a separate class of human beings from the intended audience of white folk who presumably produce and collect such objects, and clearly, given their barebones typicality and ability to be so readily summed up in such a clear and simple way, an inferior class.  Can you imagine a pair of shakers that could so successfully and completely conjure up an image of white stereotypicality? I can’t.  We whites are, it seems too human to be stereotyped in terms of our whiteness.  We have to resort to other aspects foo our being than our skin colour–our gender, our occupation, our sexuality, our age–to conjure up suitable generalizing and dehumanizing stereotypes.

Beyond that, as not just African American but two specific African Americans characters, Jemima and Mose are, as depicted here, almost aggressively over-assertive images of bright happiness, a world without shadows.  They wear bright red and bright white and bright yellow–no subtle or gloomy shades for them (except, of course, their skin, which is what has consigned them to this exclusively happy state of manic bright colourfulness in the first place).  They are also, clearly, loving and loveable servants, obedient and obliging, nostalgic reminders of the supposedly good old days in the Old South where servants were happy to serve, and indeed, as we all know, slaves were ecstatically happy to be slaves.   Slaves to white folks, of course: the image of Aunt Jemima not only implies the down-home goodness of processed foods–if she represents them, they must be just like the ones that professional home cooks used to make back in the good old days–but also, the extent to which taking advantage of the pre-processing and buying the pancake mix is going to be something sort of like having your own slave in your own kitchen.

I still haven’t come to grips with why I spend my money on these noxious things and put them in display in my home.  I understand that those who forget about history might be doomed to repeat it–but i wonder if remembering it with figures like these might be an act of repeating it anyway.  But I’ve been reading some theoretical discourse on that subject lately, and I plan to report on it in my next post.