Continuing the theme of stereotypes of people of African descent, there is this pair:

Since the human of this pair is wearing what looks sort of like a grass skirt, wielding a club, and accompanied by a lion rather than by a pancake-wielding woman, I presume he is supposed to represent, not an African American, but just an African period. He has, nevertheless, the same old fat red lips and round black eyes.  The stereotype transcends national and even continental borders, it seems.  And it’s interesting that it should be a lion accompanying him.  They are either, or both, a hunter and what he hunts, or two equally savage, equally animal-like beings.  Note, however, that both exude a form of cuteness, the hunter seeming, despite his club, sort of sweet and wide-eyed and adorable, and the lion doing his best to look dangerous with a strange sort of cutesy smirk.  They are another good example of danger depicted but contained and diminished, made to seem merely cute and harmless.

And hey, what else could they be when they come, from of all places, Banff? 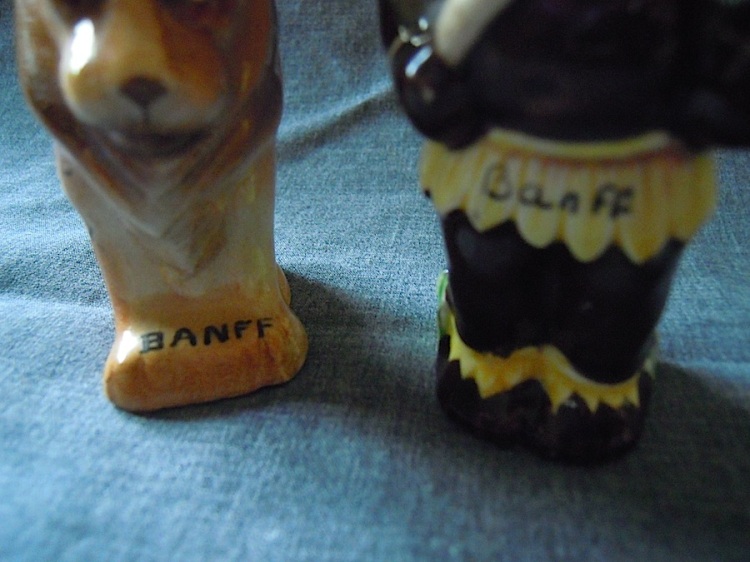 That right, Banff, Alberta, Canada, the resort in the Canadian Rockies–home of snow and skiing.  Now what exactly a scantily-clothed African tribesman and a tropical beast of prey have to do with Banff I do not know.  But I’ve already reported in earlier posts on other strange souvenirs from Banff: a pair of ungrammatical aboriginals,  and a pair of golden hands.  It begins to seem that when it comes to souvenir salt and pepper shakers, almost anything will do to represent a ski resort in the Rockies.