Unlike the Banffian lions and chuck wagons of my last post, this pair actually has something to do with the place it claims to represent: 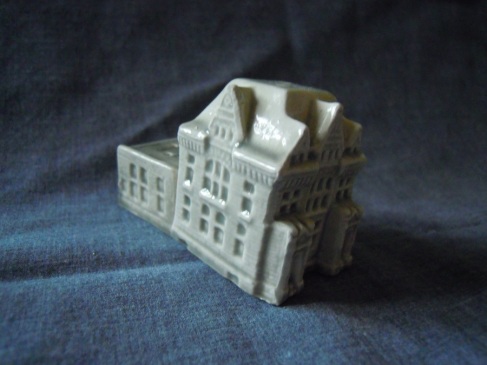 It is, in fact, a salt-and-pepper version of the Portage La prairie, Manitoba city hall.  The city hall has been divided into two parts, one for salt, one for pepper, like so:

If you look closely at the top of the smaller of the two shakers, you can read the words:

And the bottom of the other piece also makes the connection to Portage by naming it (visible upside down in this photo):

It also tells us that these shakers are a product of CanTage Ceramics–a company which, they internet informs me, still exists in Portage–CANadian PorTAGE?

So would I rather receive this set as a souvenir of a visit to Portage than, say, a generic pair of Canada Geese like the ones I have that claim to represent my own town of Winnipeg, or, say, a Portage-celbrating lion and tribesman?   Difficult to say.  There’s something pleasingly diminished about an actual city hall made tiny and in shiny breakable ceramic.  As much as it accurately depicts the Portage building, it still looks like it belongs in an adorable Christmas village alongside some  Victorian carollers.  As a representation of what I have to admit I think of as a fairly boring mundane little town on the prairies, this set romanticizes its place, makes it seem more interesting, more cute and cuddly–more souvenir-worthy, more happily visitable.  Or perhaps what I’m really saying is that the Portage City Hall in a shaker set is just as bizarrely and adorably unreal as a representation of the place as are the tribesman and the chuckwagon of Banff.  In the shaker world, apparently, the cuteness of miniaturization trumps realism every time.