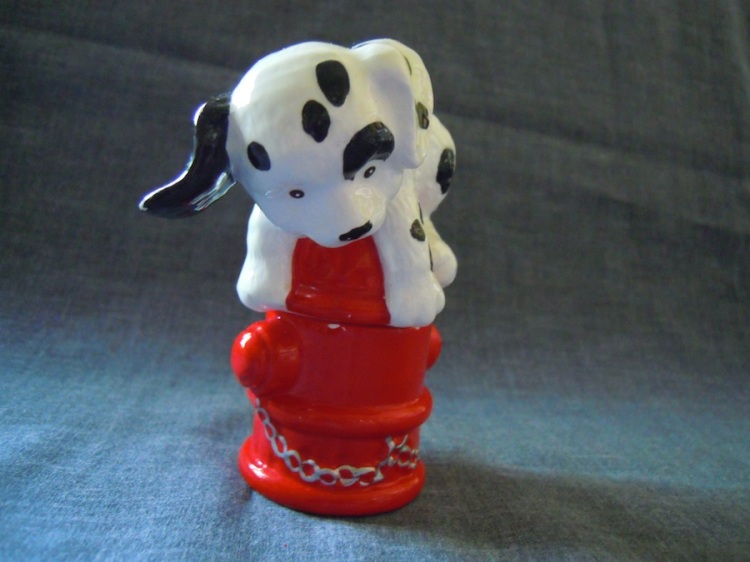 At first glance this is only a little bit weird. It involves a dog and a fire hydrant, as did the subject of an earlier posting:

But that dog was doing the sensible doggy thing and peeing on the hydrant.  This one, for no apparent reason, has nested itself atop the hydrant.  Was the dog attempting a long jump over the hydrant that failed spectacularly?  Perhaps it is some sort of act of declaring ownership, for the dog is, its spots suggest, a Dalmation, and Dalmatians have a longstanding historical association with fire departments.  Perhaps then this shaker set symbolically represents the synergy of the Dalmatian breed and firefighting equipment?  It’s possible, I suppose.  But still a little weird.  How did the dog get up there anyway? And above all, why?

But things get weirder when we split the nester from the nest and new the shakers separately: 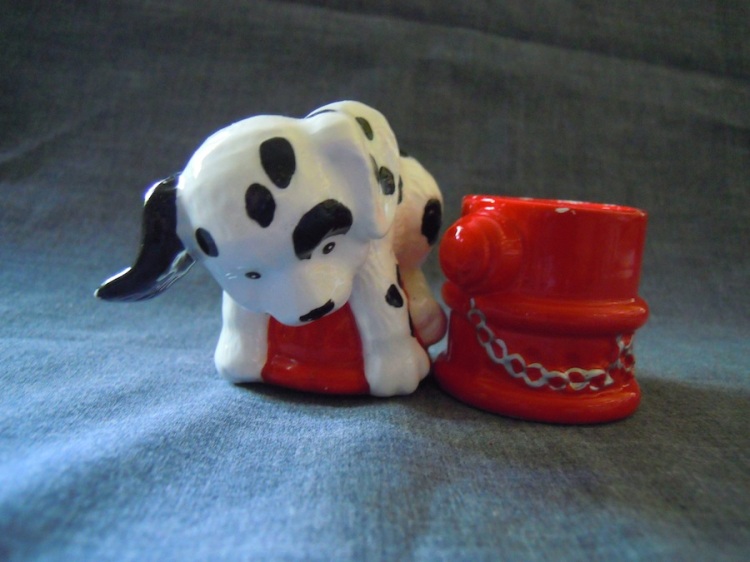 They do not emerge as one might have expected, as one dog no longer nesting on one hydrant.  Instead, the bisection leaves the dog attached to the top of the hydrant, and the hydrant without its top.  That does, of course, allow the dog to sit flat on the table on its own.  But that practical functionality does not prevent the imagery from seeming strange and unsettling.  Is the dog somehow glued to the hydrant?  Has the dog confused the fire hydrant with an object of desire and forged a long-term relationship from which it cannot extricate itself, at the cost of the hydrant’s integrity?  What sort of fire hydrant has a removable top?  And if you did remove it, wouldn’t water be gushing out?

As both this shaker set and the one I described in my last post, in which the bubbly liquid somehow followed the girl who swam in it out of the cocktail glass she swam in, the liquid all the while keeping the shape of the glass that once held it, the art of nesting in the world of salt and pepper shakers can be problematic.

One thought on “Unusual Bisectionality”