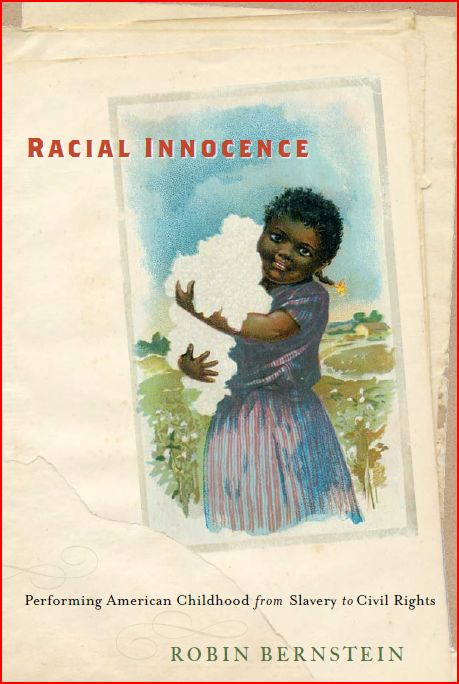 n her recent book Racial Innocence: Performing American Childhood from Slavery to Civil Rights, Robin Bernstein offers an insightful and innovative analysis of the ways in which ideas about childhood, texts about and for children, and objects representing children and/or intended to be used in their play intersected with and were inflected by ideas about race in nineteenth and twentieth century America.   She performs her analysis of  objects like toys and dolls by identifying them as a what she calls “scriptive things”: items of material culture that prompt meaningful bodily behaviors, that is, suggest in the repertoire of meanings they imply and the narrative that sustains them specific ways of interacting with them–much like the scripts used in the theatre: “the set of prompts does not reveal a performance, but it does reveal a script for a performance.  That script is itself a historical artifact.  Examination of that artifact can produce new knowledge about the past.”

In other words, reading a script is a matter of applying what one knows of a range of relevant matters: not just knowledge of the place and time and kinds of people it describes, but also the theatrical practices it implies, the knowledge of stagecraft that might allow one to envision or produce a performance of it and of the context of historical and current theatrical performances it might relate to or vary from.  A production of a play is then shaped by its script, even though each new production of that script is likely to be different from others.  The script, as Bernstein suggests, invites certain ways of making use of it without absolutely demanding them.

Toys, dolls, and all the other objects we human beings interact with equally invite certain kinds of behaviour from those who make use of them–and as a result, we can explore them in terms of figuring out what those scripts might be.  We can read them in terms of discovering how they both express the values of the culture that produced them and help to sustain and shape that culture by inviting certain ways of interacting with them–ways of behaving that have moral, ethical, and cultural implications.

The objects Bernstein describes include a variety of depictions of people of African descent–object like Stafffordshire figurine of Uncle Tom and Little Eva (of Uncle Tom’s Cabin), like this one held in the Hunter Museum of American Art, and like this mammy and white child topsy turvy doll.

As I read Racial Innocence, I learned a great deal I hadn’t expect to learn about how concepts of race have found expression in American culture in a variety of ways, in a number of surprising contexts, and in a number of surprisingly subtle scripted actions invited by a range of interesting (and interestingly scripted) scriptive things.  But I also found myself thinking that much of what Bernstein had to say about the scriptive things she described might also be applied to novelty salt and pepper shapers–most obviously, to ones like those representing black stereotypes like the one I’ve described in previous entries, such as this set of Aunt Jemima and Uncle Mose I discussed here and here:

But, I found myself thinking, why stop there?  The concept of scriptive things seemed like an intriguing and, for me, new of thinking about the objects we surround ourselves with and use on a daily basis.  It might well throw light, not just on the shaker sets with African American connections, but on a whole range of other sets depicting a whole range of different kinds of subjects.  So I’ve decided to do some thinking about that, in a series of entries to follow.