Before I head onwards towards a consideration of the novelty aspects of shaker sets as scriptive things, I think there’s one other aspect of salt-and-pepper sets generally that needs to be considered:  their implications as a coupled pair.  The question here is not just, why salt and pepper, but also, why salt and pepper together?  Why the two of them?

The first thing that occurs to me is that their twoness does seem to be invested with significance.  Perhaps it’s just familiarity, but there’s a feeling of rightness about the two always being there, and a sense of there having to be a quite different kind of cultural atmosphere if there were only one of them–if there were conventionally just salt with no pepper or pepper with no salt–or if there were three or four condiments usually available instead of just these two.  As two, they seem to evoke the basic binary opposites that, according to Claude Levi-Strauss, are the primary components of all human thought.  We think of what we experience by dividing what we perceive into binaries: good and bad, rich and poor, male and female, gay and straight, us and them, old and young, etc., etc., etc.: and then we try to find some way of uniting what we have chosen to perceive as divided.  For Levi-Strauss, the myths that sustain cultures are all about the process of juggling such opposites against each other and exploring or insisting upon imaginative ways of trying to move past their opposition.  Salt and pepper shaker sets might well represent that sort of mythic thinking.

They do so, I think, by emphasizing both sameness and difference.  Salt and pepper are both seasonings, but each is a different seasoning.  They serve more or less the same function in relation to food–but do so in terms of different flavours with different implications.  Whatever saltiness is, whatever ideas or emotions it evokes (and there is a wide range of them, from evocations of sad tears to painful wound-rubbing to flavourfulness), it is significantly different from what pepperiness is, and what ideas and emotions it evokes: heat, daring, danger?.  Yet both serve the same function in relation to personalizing food and adding to what its basic and/or cook-established flavours are–both occupy the same categories for all the differences in the ways they do it.

Furthermore, as binaries, they seem to exist most significantly in relationship to each other–as necessary to each other in order both to establish an opposition and to suggest the possibility of the opposition’s resolution, or, perhaps, the completeness that the two together might create as opposed to the insufficiency of just one of them.  They go together like a horse and carriage, or love and marriage–as that old song insists, you can’t have one without the other.  The song is wrong, of course–you can have one without the other.  Indeed, the very fact of their individual separateness from each other makes it possible for them not to come together, to love without marrying or to sprinkle just one condiment on your pork chop and forget about the other altogether.  But even if you choose salt but no pepper or pepper but no salt, the invitation is there to think of them as part of a pair, a pair which give you the freedom to choose both or neither or just one. They imply this script of choice and binary opposition, and it’s the basis of all the jokes and intriguing implications of all the novelty sets:  there’s this thing, and then there’s this thing, and whaddya know, they go together.  Or not.

There is also, I think, a pretty strong insistence in even the most basic of shaker sets of their difference from each other.  In plain old glass shakers you can see through the glass that the one condiment is white and the other is black; in sets that represent nothing animal or human, etc, but are just a pair of two similar-looking containers, there tends to be marking, usually a large S and a large P, the makes the contents crystal clear.

When such shakers appear on a table, they usually represent the only typographical print on the table–unless there happens to be a printed menu, there are no other letters visible but this S and this P.  The appearance of these letters in an otherwise print-free zone emphasizes how significant it is that we realize their difference from each other and their equally important togetherness in the category they share.  It also suggests how significantly symbolic and linguistic their differences are–how they imply a structure of relationship that is the basis of how language generally works.  If looking at a set table might be understood in terms of Jacques Lacan’s version of the Imaginary–what we see as different from who we are while seeing it–then the S and P might represent a move into the Lacanian Symbolic–the oppressive prisonhouse of language in which everything relates to and evokes everything else and insist therefore on claiming to be the way things are and the only way we who have entered into language can understand not only others but ourselves.  S and P on the table–even when the shakers don’t actually say S and P, but imply in their representations a version of that basic difference–is an expression of agreement to being social, enmeshed in a specific civilization and its practices, a move beyond what we see to an entire structure of abstract meanings.

I suppose, in the context of a culture with a history of slavery, segregation and ongoing racial prejudice like the USA, there also has to be some hint of significance of the importance of a black condiment and a white one as the omnipresent accompaniments to mealtime.  In an earlier post, I explored the oddity of there being lots of depictions of African American stereotypes in my extensive collection of shakers, and lots of depictions of what appear to be white people, but only one set that depicts a mixed race couple.  In a comment on that post, Kyla Wazana Tompkins reported her findings, explored in her new book Racial Indigestion: Eating Bodies in the 19th Century, that “racist kitsch is rarely about a black and white figure in some sort of mutual relation, but rather about blackness being consumed.”  But I’m finding myself wondering in the context of American history and culture if racial black-and-whiteness might not be implied in shaker sets even when there is no explicit expression of it–if part of the specifically American script of shakers on American tables might be the expression of attitudes to race that seems to appear in just about every aspect of American culture, and so must, surely, be implied by the conventions of table-setting and dining and the scripts implied by the items conventionally found there?

In that earlier post on mixed-race shakers, I considered a set of two figures, one black and one white, that can be placed in such a way that they appear to be hugging each other–and when they do, they form a Yin/Yang symbol when viewed from above.  Here’s another set that utilizes a similar idea. Apart, they are just oddly jagged shapes, one black, one white. 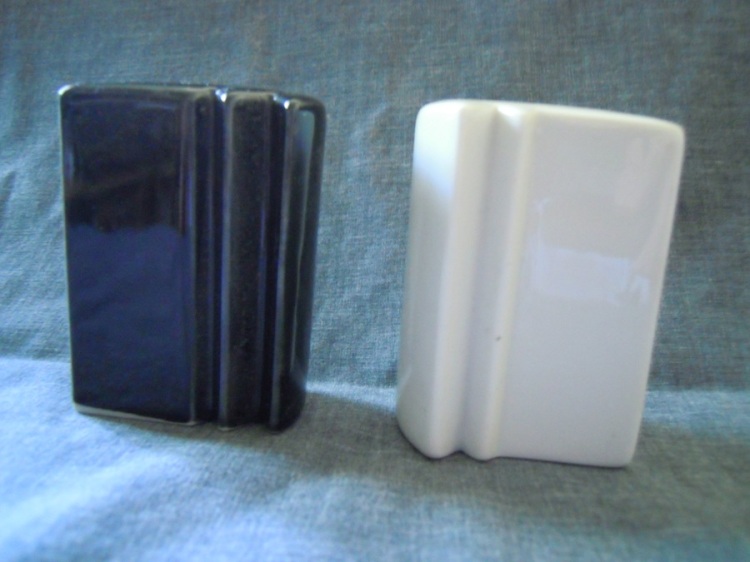 Together, they form  a more symmetrical shape.

Viewed from above, they turn out to be forming a heart–an obvious symbol of togetherness, of opposites united, of black and white become one larger, better thing together. 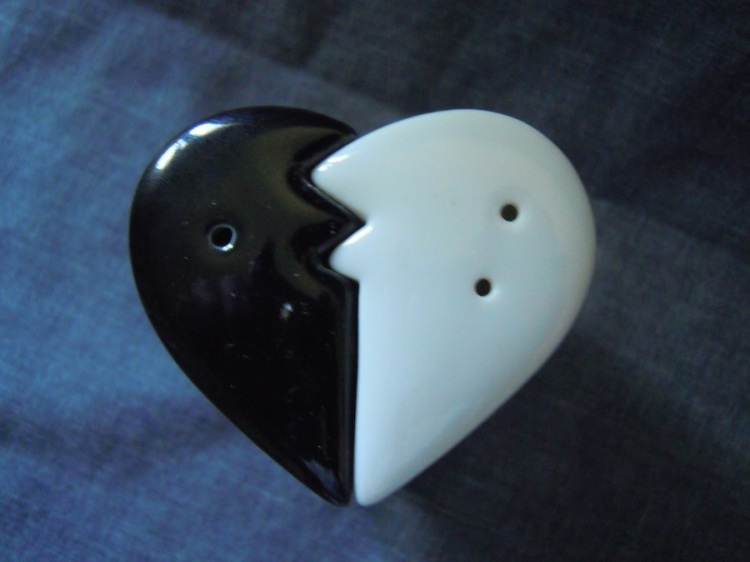 And yet: they are still clearly marked by their original separation and opposition: one half of the heart is still black, the other still white.  And come to think of it, one might just as easily read the implied script as the reverse of coming together: indeed, in terms of how Robin Bernstein deploys her concept of scriptive things, that seems even more logical.  As one chooses to use either the salt or the pepper, one pulls the heart apart, separates the black and the white from each other.

One flavours one’s food on the basis of a rupture and an end to organized companionship (or enforced togetherness?) and love?

And then, what to make, after the seasoning is done, of the act of putting the heart back together again?

At any rate, I’m tempted to read all that as a sort of racial allegory.

One thought on “Binaries as Scriptive Things”