Some months ago, I did a series of posts about shaker sets that represent women with various limbs, etc., missing.  I described this set: 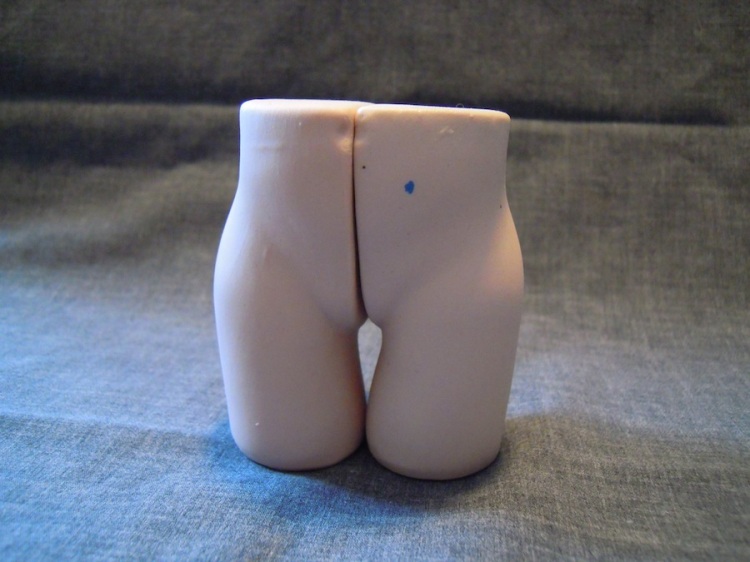 But I somehow managed to forget about this set: 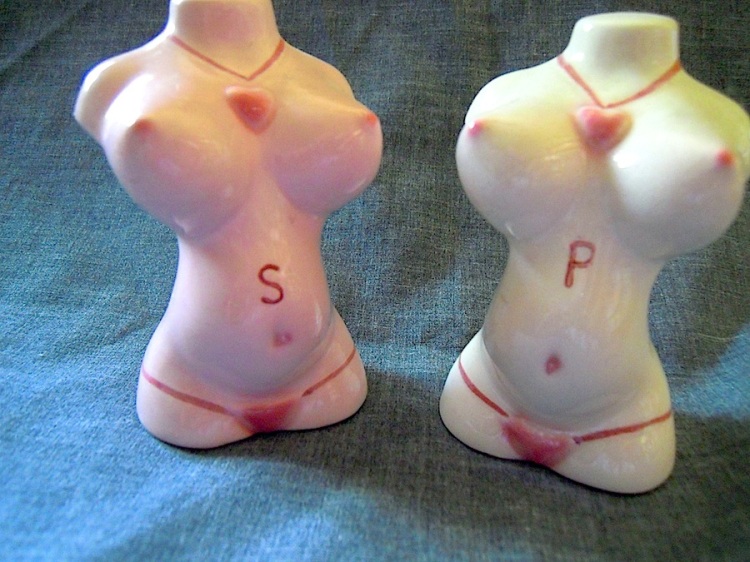 Here we have two more versions of what appears to be a certain sort of masculine ideal of womanhood: no mouth-equipped head to yammer away at you on and on day and night, yadda yadda yadda.  No arms to hit you with for no reason whatsoever at all.  No legs to walk (or run) away from you with.  Just the essential equipment to be a sexy doormat.  But with, of course, that essential sexy equipment in spectacular supply: ginormous boobs.  And despite their thrusting ginormity being so spectacularly on display, a little bit of modesty about the other sexy parts–something a little ladylike, a little valentine-y–as the matching pink heart necklaces also imply.  This is all about love, see, not just sheer rutting lust at all.

There’s something sort of evocative of the Venus de Milo here–a depiction of female torsos without arms.  It’s deeply peculiar that the accidental loss of arms on ancient statues like that one seems to have mandated the production of armless images of women like these shakers as a form of art, and evocative of artiness.  There is, of course, nothing the least bit arty or artful about these shakers–but their lack of limbs does somehow evoke the seriousness and solemnity of a museum, in a way that justifies or allows for the crude randiness they are actually in the business of evoking.

Being receptacles of differing condiments, salt and pepper, it’s not surprising that these two ladies should each be of a different skin tone.  what is surprising is that the skin tones in question should be white and, well, whiter.  Once more, as I suggested in earlier posts about shakers and skin colour, there is no representation of “white” skin in the same set as a depiction of “black” skin–of European pigmentation as opposed to and in conjunction with African pigmentation.  The world of salt and pepper sets remains more or less completely segregated in terms of race.  The offensive racist stereotypes remain in one sort of set, quite isolated from the offensive female stereotypes in sets like this one.