As I suggested in an earlier post, alongside the exotic aliens, the other major branch of Asiatic stereotypes represented in my salt and pepper shaker collection consists of cooks.  Here’s a pair: 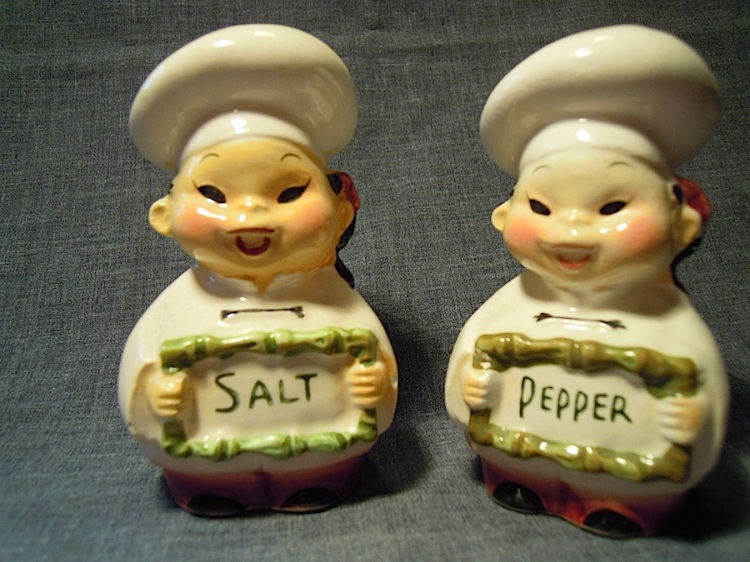 The standard stereotypical slanty eyes, so slanty that seem to be creepily without any whites, and this time accompanied by jolly rounded cheeks and a merry smile–a sort of Asian-stereotype version of Jolly old Saint Nick, albeit without the beard or Rudolph.

What seems most interesting about them, however, is that these two look exactly the same.  I suppose you could make the same comment about lots of figures in salt and pepper sets, which, as a quick browse through earlier posts on this blog will quickly reveal,  often consist of two similar or even duplicate dogs or cats or potatoes or feet or light bulbs.  But when they are dogs or potatoes, they don’t conform to any longstanding cliché about how all [insert racist slur here] look alike.  Such a cliché does, however, exist about Chinese or Japanese people–and so these two lookalikes fit ever so comfortably into that context and thus seem to be a jolly but perhaps unconsciously mean-minded affirmation of that racist cliché.

The cliché is only further confirmed when I place these salt and pepper shakers into the context of the even larger set of which they are a part:

Now we see that we have not one, not two, not even three, but actually four Chinese cooks who all look exactly the same as each other. As does, clearly, if this set is any evidence, the entire population of China.  The whole thing about racial stereotypes is that believing in them depends on crude approximation and lack of actual perception or experience of any individual members of the groups they purport to sum up.

It’s interesting that these Chinese people should be cooks, and that these cooks should be Chinese people. There was a time not so long ago, especially in small towns on the Prairies and elsewhere, when the average North American’s experience of people of Chinese descent consisted of the only “Chinaman” in town, the cook who ran the local restaurant, where you could get not only bacon and eggs and hamburgers, but also exotic dishes called things like chow mein, and chop suey.  Not surprising, then, that Asians stereotypes in the form of salt and pepper sets directed at the North American market should be represented as cooks–even though most of the people involved in manufacturing the sets were most likely Asian and in Asia but too busy at their menial factory jobs to be doing much cooking.  Or all that much smiling.