This post stands as a warning about never making a generalization.  In my last post, commenting on how salt and pepper shakers represent the gender of the characters they represent, I suggested that  “once gender has been signified . . . then it is always, as far as I can tell, one shaker of one gender and one of the opposite gender.  One male, one female–that is the strict order of the world of shakers.  No Adam and Steve here.”  And then, as soon as I posted that, I took a look through my collection and immediately found this set: 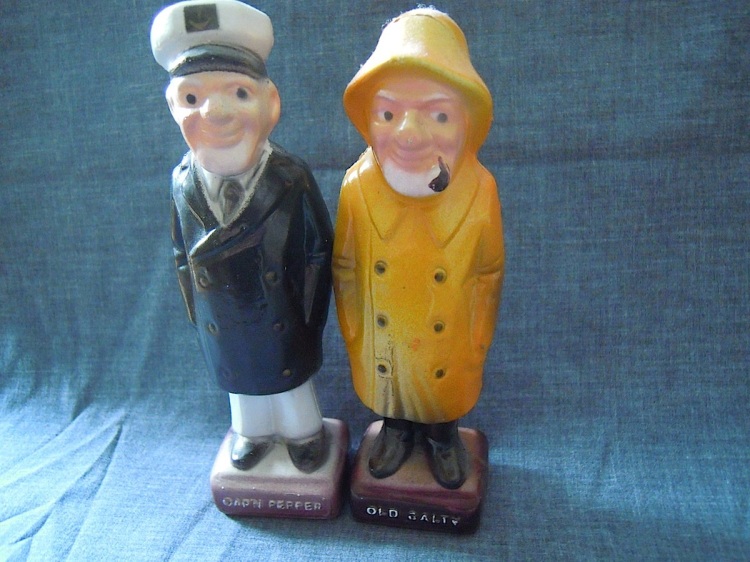 Well, hello, sailors.  Hello, Adam and Steve, otherwise known as the writing on their pedestals says, as “Old Salt” and “Cap’n Pepper.”

This is not to say that my generalization is not generally true.  The vast majority of salt and pepper shakers that imply the gender of the characters they represent do include just one male and just one female.  The oddity of Old Salt and Cap’n Pepper is noticeable enough that I realize I usually refer to this set as “the gay sailors”–the mere fact of the set consisting of two males seems almost inevitably, in the context of the heteronormativity so stringently enforced in the salt and pepper miniverse, to be a statement about their sexuality.

This set, incidentally, is one of the few I own that is made of moulded plastic, rather than the usual ceramic or, occasionally, wood.

2 thoughts on “Adam and Steve After All”