The fifth or sixth egg of the eleven in my salt and pepper shaker collection is most notable for its footwear: 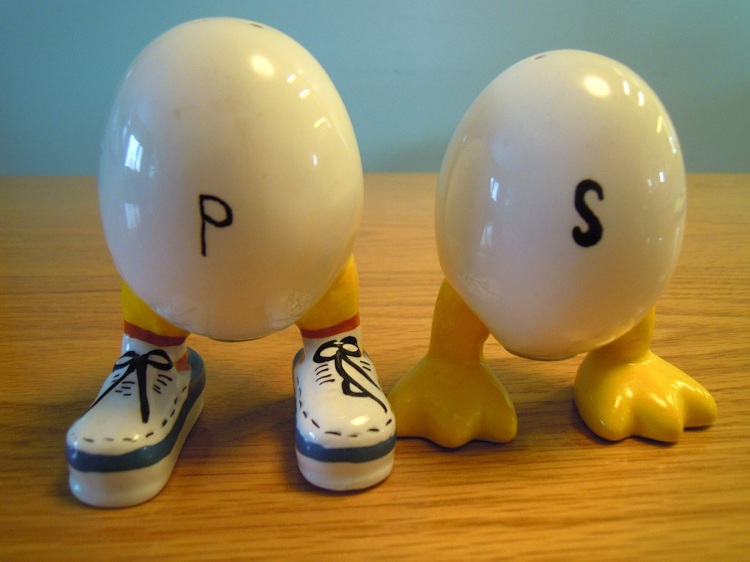 This freak of nature was born with its shoes already on, it seems. How the shoes got inside the shell is unclear–unless perhaps, those are not shoes at all, but this particular chick’s actual lower appendages. Perhaps, before giving birth to it, its mother had a passionate encounter with a stranger of the Adidas or Reebok persuasion.

And who knows what else will emerge as its shell breaks further open? A chick in jogging shorts? A tiny human in jogging shorts who has somehow been imprisoned in an egg? On the face of it rather cheerful, this egg and its apparently more ordinary companion are really kind of creepy. I mean, maybe I’m reading the scale all wrong. Maybe it’s actually a miniaturized version of a human-being-sized set of eggs, in which case, the one on the left is just a person wearing people shoes enclosed in a giant eggshell, whereas the creature on the right then seems to be a giant chick about to emerge from an equally giant shell and wreak havoc on horrified bystanders. Or maybe those are just fake chicken feet after all, and the two are just plain human children in unsettling Halloween costumes. Or hey, wait a minute, maybe it’s just a person in jogging shoes and a giant chicken who happened to be just standing there when two huge egg-shaped spheres flew down out of the sky and almost completely surrounded them. It might be a fifties movies called The Attack of the Alien Layers or something.

The point is, the shoes included in what would otherwise be just a pair of chicks beginning to emerge from their shells are a strange and unsettling detail that just doesn’t seem to fit the rest of the picture this pair of shakers creates. The result is a kind of absurdist theatre, a surreal form of wit that I wouldn’t have expected in the context of the salt-and-pepper miniverse.

Note, also, the ongoing humanizing of the animals of the miniverse. Without the presence of chick faces to put lashes around the eyes of and pinkish blush on the cheeks of, the maker of this pair has chosen to add a pair of human shoes–a detail that implies far more than the more conventionally cute blush or lashes do that this is a creature somehow on the border between human and animal, a transitional being neither human nor animal nor humanized animal, and therefore, a disturber of established categories and very unsettling. Deliberately unsettling, or just trying to be cute? I do not know. I just know it’s way too disturbing to be successfully cute.