This is a bit of a cheat, maybe.  The typewriter on a desk, I now declare, goes with . . . a computer terminal:

Well, it has a keyboard, right?  And it’s sort of like a desk.  You sit at it while working, right?   Or at least, you used to do so, in an earlier world of bulkier computer terminals.  It is certainly a work station, because what it actually goes with is the man who sits in front of it, and whom, apparently, is in the process of giving in to his urge to punish it for what it makes him do all day: 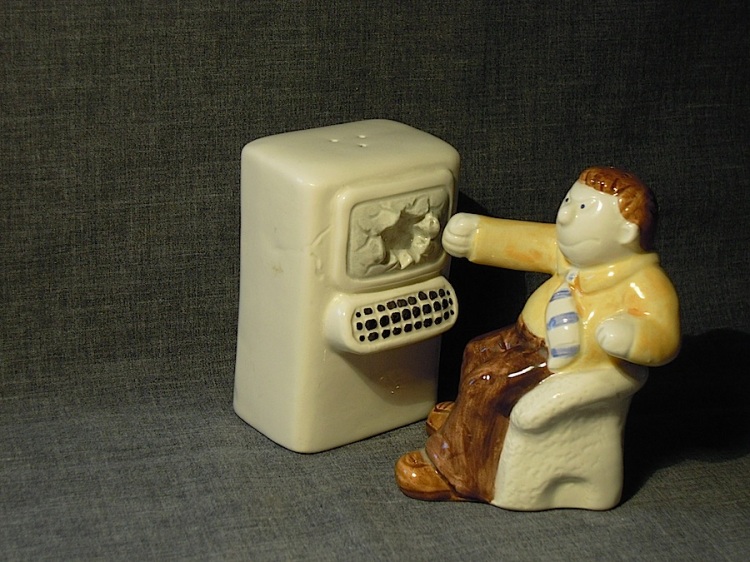 The man is looking suitably enraged as he smashes his fist into the screen.  It is a mighty punch, as can be seen when you turn the computer terminal around: the blow has gone all the way through to the back:

This, like the set I posted about earlier revealing the results of mature people enjoying  “One More Time” is a visual joke.  When I was first given this set, I thought it might be a guy having bad luck with a gambling machine–but this terminal looks much too business-like for that, as does the man’s tie.  It has to be work-related rage.  Interesting, then, that the two shaker sets I have that represent life in the business world of offices should both depict people who clearly hate their jobs.  And one of them has actually done something about it.  Something pretty drastic.

And note that once more, as with the tomahawk-bearing aboriginals I discussed in earlier posts, the hostility and threatening danger of what is being depicted here is totally subsumed y the miniaturized and softened cuteness of the object doing the depiction He may be gone totally bonkers, but this guy is just so roly-poly and chubby-cheeked and adorable.  Who could fault him?  Who could fear him?  I mean, sure, I’d hate to run across someone like him in an office I’m in the process of doing business at.  But then, I’d hate to meet a Cabbage Patch Kid or an actual living breathing Elmo in real life, too.  Or for that matter, a young lady with eyes actually shaped like tear drops. She’d probably be hiding them behind sunglasses instead of bravely smiling through the tears of having them.

One thought on “Miniaturized Workplace Rage”