We continue the go-with chain with what appears to be another pugnacious guy, all ready to return the blow being struck by the enraged data-entry fellow of the last post:

But why, you might ask, if he has his dukes up and is all ready to fight, is he sitting on the ground?  The answer becomes clear as we view what he does actually go with: 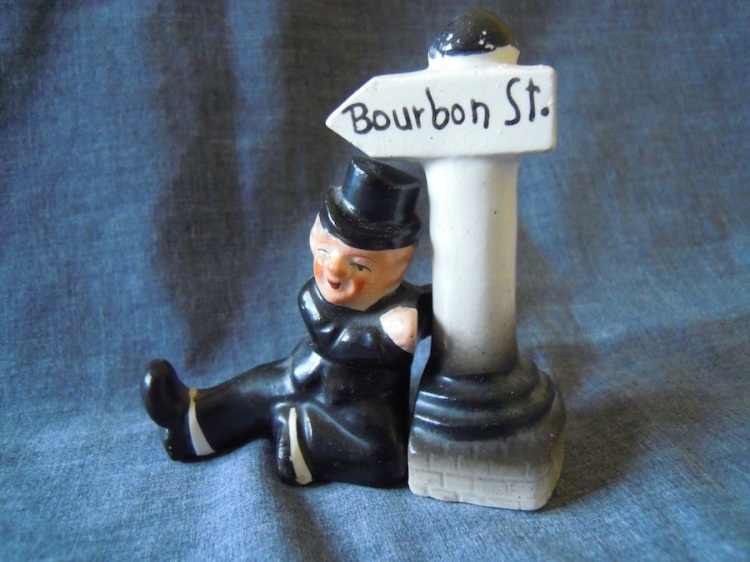 He is actually, it now becomes clear, a rather drunk man-about-town, the town apparently being New Orleans, the street being Bourbon Street, the condition being, too sozzled to be able to stand up.  In other words, this drunk goes, not with the traditional lamppost of cartoon cliché, but a street sign.  I suppose that makes him a souvenir of Bourbon, the major tourist attraction of New Orleans–not just the street but the controlled substance.

Meanwhile, I’ve been trolling the internet looking for an example of the classic drunk-hanging-onto-a-lamp-post cartoon–and I can’t find very many.  Apparently it isn’t as classic as I thought it was.  The drunk with a lamp-post seems to be most popular around the internet these days in three jokes:

A drunk loses the keys to his house and is looking for them under a lamppost. A policeman comes over and asks what he’s doing.

“I’m looking for my keys” he says. “I lost them over there”.

The policeman looks puzzled. “Then why are you looking for them all the way over here?”

“Because the light is so much better”.

Statistics in the hands of an engineer are like a lamp-post to a drunk–they’re used more for support than illumination.

A drunk leaning against a lamppost stares up at a signboard and yells, “It can’t be done, it’s too big!”

Another drunk staggers by and asks, “What can’t be done?”

One thought on “Taking It to the Streets”