Out on the street, you can find, as well as street signs, the occasional fire hydrant:

And along with a fire hydrant, you will usually find . . . ?  A fireman, perhaps?  No.  A group of children getting a free drink on a hot summer day?  No.  What a fire hydrant goes with, of course, is a stream of running liquid: 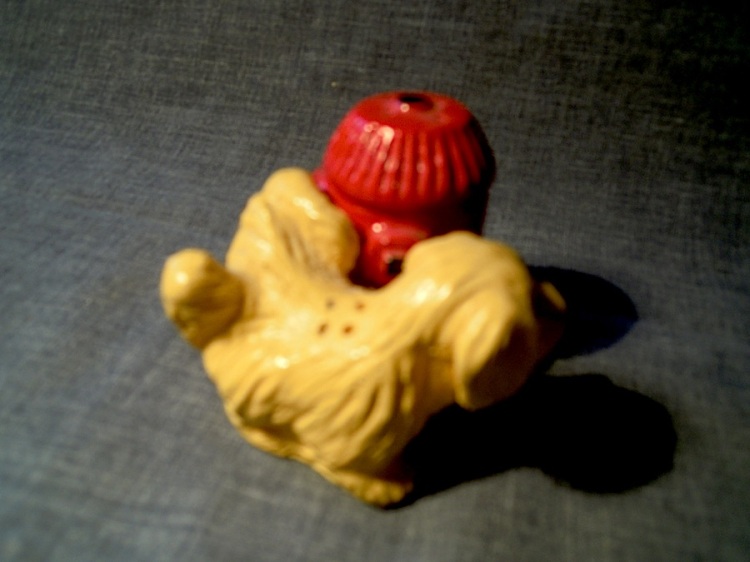 The liquid, in this particular example, emerges not from the hydrant itself, but from the animal who is not only making use of the hydrant as an eliminatory convenience, but also, letting others of its kind know it has been there.  Or in other words, a fire hydrant goes with a peeing dog: 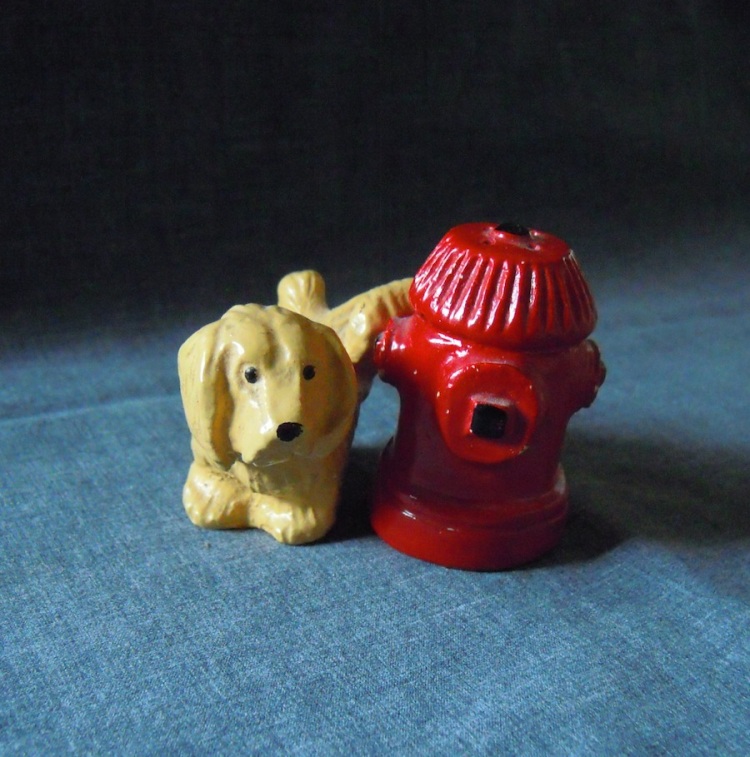 What intrigues me here, as with so many of these go-withs, is the impeccable logic that clearly joins two things together, even though a first glance at one or the other of them would not likely have automatically or even very quickly evoked the other as an obvious accompaniment.  Honestly, when I look at a hydrant I do not automatically think about dogs (although perhaps I might have if I sent more time looking at old cartoons–for I guess this is yet another cartoon cliché, a true go-with for the drunk and the lamp-post).

At any rate, the practice of viewing the world through the paradigm of salt and pepper, this and that, go-with and go-with, both creates strange bedfellows, matching pairs, and imposes a persuasive logic of pairness: the bedfellows may be strange, but obviously, since they are together, they do and must belong together, each the most obvious and most logical companion for the other.  Of course a dog goes with a hydrant.  What could be more obvious?  And not because both emit streams of running liquid, but because one is a salt and one is a pepper, and they are sitting beside each other, and that’s that.

Some of the more interesting sets of salt and pepper shakers I’ve seen in antique shops are ones that are not in fact, clearly sets–or at least were not necessarily designed to be the sets they now are being sold as.  Not surprisingly, for salt-and-peppers consist of two objects that are in fact physically detached from each other.  It’s quite possible, then, that one of the two might break, or that the two might end up somehow separated from each other–a result of a nasty divorce settlement, perhaps, or a simple error in packing when a roommate leaves, or a salt incorrectly grabbed up along with the remains of dinner and thrown in the garbage, while it’s now sadly lonely pepper partner remains behind.  What more obvious thing for a store owner to do when such a sad single shows up in the shop but  to find some other woeful isolate that might by some stretch of the imagination be considered to go with it, and try to sell them as a pair?  And lo, as if by magic, they do, sort of become a pair, as would-be purchasers like me look at them and, more or less inevitably, I think, try to decide what is the intended connection between these two objects now identified on their sales tag as a pair.

The paradigm of the pair is powerful.  It can join what some man (or woman or child) has put asunder.  In the shaker universe, linguistic binarism rules.

One thought on “The Tyranny of Pairs”