This not-so-svelte cook is all on his own: 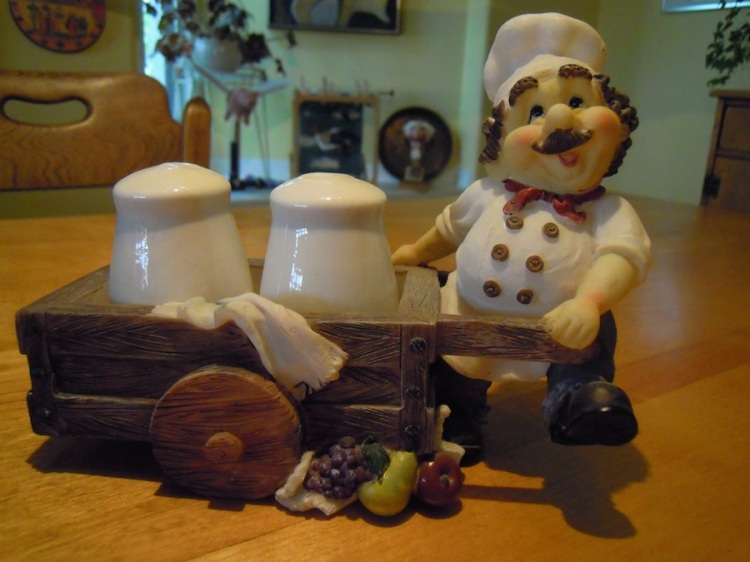 With a moustache similar to the gentleman in the set I discussed a couple of posts ago, he seems to be aspring to the Italian-chef stereotype: not just large-tummied and round-cheeked (and cherubically round-nosed), but with a moustache, another perky handlebar moustache.   And from the look of his mouth, he appears to be raising his voice in song–possibly a Verdi aria or a song in praise of pasta fazool.

He is not himself a shaker: but the cart he is wheeling contains two objects almost as large as he is but shaped like a fairly conventional set of non-representational shakers–so there is a sort of disruption of the usual binarism of the shaker world: here we have three separate entities representing four major objects: one cook, one wagon, one salt marked S , one pepper marked P.

There’s another disruption also.  The shakers are giant ones for the chef, in scale for would-be users like me.  And there’s maybe something a little disconcerting about the inconsistency of scale; like, why is this tiny chef carting around these gigantic salt-and-pepper shakers?  Is he really that tiny?  Are they really so large, and if so, why?  It might make more sense if they looked like large barrels of flour or something like that, something large enough to be pulled in a cart that size by a figure that size.  But they don’t.  They just look like boring but gigantic shakers.

And yet this set is similar to another set I have that consists of a miniature human figure and a proportionally giant shaker–and this time the set makes perfectly good sense.  How, you ask?  More about it in my next post.