Since I’m on the subject of pigs on top of other pigs (see my last post), consider these:

In this case, however, even in spite of that potential zoned-out bliss, I don’t think there’s anything gay going on here, ambiguously or otherwise. There is nothing whatsoever that would mark these pigs as either male or female. no trousers, no lipstick. There is, however, something ambiguous happening–ambiguously sexual. Especially because of the lack of trousers.

But what’s most interested about these two are that they are not in fact a salt and pepper shaker set. The two of them together are just one piece, and make up just one shaker. As part of a set along with their partner, they look like this:

And not only that, but they are a pair of stackers. The underside of the solo pig is curved in such a way as to allow him to perch on top of the other two: 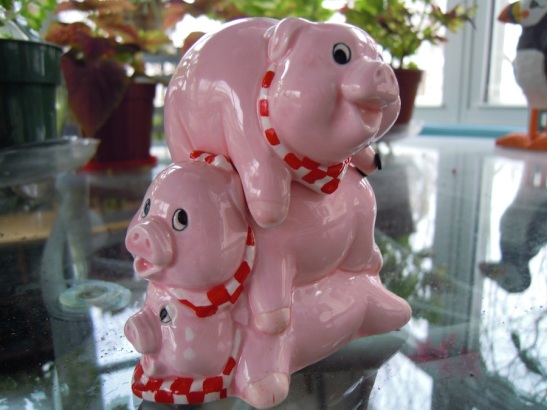 So, not only ambiguously sexually, but experimentally and wildly so. A ménage à trois petits cochons.

This is also, intriguingly, the only shaker set I own that disrupts the usual pattern of binary opposites, by depicting three figures rather than the usual two. In doing so, it does something even more wildly transgressive than the possible implications of the actions it depicts. Not tow but three pigs in a shaker set? As a collector of salt and pepper shakers, I have to say that this is just wrong. Completely and totally wrong. It defies the logic of the salt-and-pepper miniverse. And that confirms how important the almost universal binarism of this miniverse is. Salt and pepper shakers are all about twoness.

Technical notes: this set is among the few I own that identifies the company responsible for them. The labels on this pair say “PAPEL® ©FREELANCE . The internet (http://www.toydirectory.com/PapelFreelance/) informs me that, “Headquarter [sic] in Monroe, NJ, Papel Giftware designs, manufacturers, and distributes a variety of social expression giftware for everyday occasions and holiday [sic].” The company itself appears to have no website. The label also tells me that the shakers are “Made in Srilanka”–meaning, I assume, Sri Lanka. As for what “social expression giftware” is–I have no idea.