In honour of the season, I offer yet another salt and pepper shaker set that consists of two male figures:

And yet, of course, this makes no sense, no sense at all.  There can only be one Santa Claus, surely. Other shakers, operating safely within the logic of a rigidly binary world, represent various ways of solving the problem of representing the right jolly old elf in a salt and pepper set.  Here, for instance, Santa has a surprising companion:

It’s a polar bear, I think–a logical pet for a North Pole resident.  And here, a very young Santa (or Santa imitator?) has a Mrs. Santa-or perhaps, given her age, a Miss Santa–to accompany him:

They seem to be singing–some carol that makes Santa swing his hips, it seems.

But I have no idea about what to make of a set consisting of two, count ’em, two Santas.  Maybe Santa has a secret twin brother named Eugene Claus or Luigi Claus or Klaus Claus that nobody ever told us about?  Or maybe the set is depicting an incident at a convention of department store Santas, and so it’s two different Santa pretenders?  Or maybe these two are supposed to be just the one same Santa, but caught in different moments, like a series of photographs of the same subject?  Figurines that represent different times?

One way or the other, I have found myself unable to resist the implications of that one Santa’s raised arm.

I’m not sure I know what the raised arm is supposed to mean.  Is this Santa in the midst of belting out a loud chorus of “Here Comes Santa Claus”?  Is he pointing to yonder star?  Whatever it’s supposed to be, the raised hand does offer some fascinating possibilities in relation to a few of the other shakers in my collection.  Especially because those mittens look like boxing gloves.

For instance:  the Santa who has no use for clowns:

Or the racist Santa, being defied by a jovial club-bearing native of Banff:

Or the Santa who isn’t afraid of the sizeable Paul  Bunyan:

Or, finally, the Santa who gets into a brawl with an angry computer user: 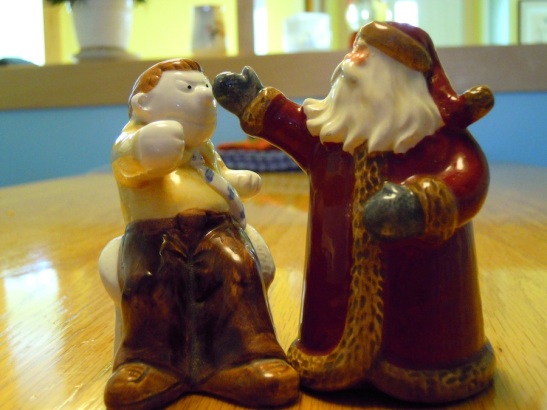 No question about it: this raised-arm Santa clearly knows who’s been bad or good and knows exactly how to encourage everyone to be good for goodness sake.

Be good.  Have a merry Christmas.

One thought on “Two Santas, and Some Guys Who Haven’t Been Good”