The breasts of my last entry are not the only detached body parts in my salt-and-pepper collection.  Here are a pair of hands:

They are, as you can see, golden hands.  Or at least gold-painted ones.  As you can also see, also, the hands hail from Banff, Canada, the tourist haven in the Rocky Mountains.  Or at least, the marking along the thumbs make the claim that they hail from there; the bottoms of the shakers acknowledge their actual origin in Taiwan.

So what, you ask, do a pair of golden hands have to do with the Rockies?   Maybe they celebrate that historical moment when some old prospector, so fond of his hometown that he had its name tattooed along the side of his hands, finally found the mother lode of gold just outside of downtown Banff, only to accidentally light his dynamite and blow himself apart as he reached out and touched it.  Maybe the politician who drove the golden spike that joined together the last link of the trans-Canadian railway left his hands on the tracks just a few seconds too long after driving that golden spike in.  Maybe the Man with the Golden Arm OD’ed and imagined that his own hands at the end of those arms belonged to an attacking Golden Retriever in need of discipline and punishment.  I truly do not know.  I suspect no one ever did know.  No one ever said that tourist souvenirs had to actually represent the places they are souvenirs of, right?

The hands might seem a useful gift on the occasion of someone’s retirement–a cheaper substitute for a golden handshake.  In fact, though, if you align them properly in relation to each other, it becomes clear that they are better suited to praying: 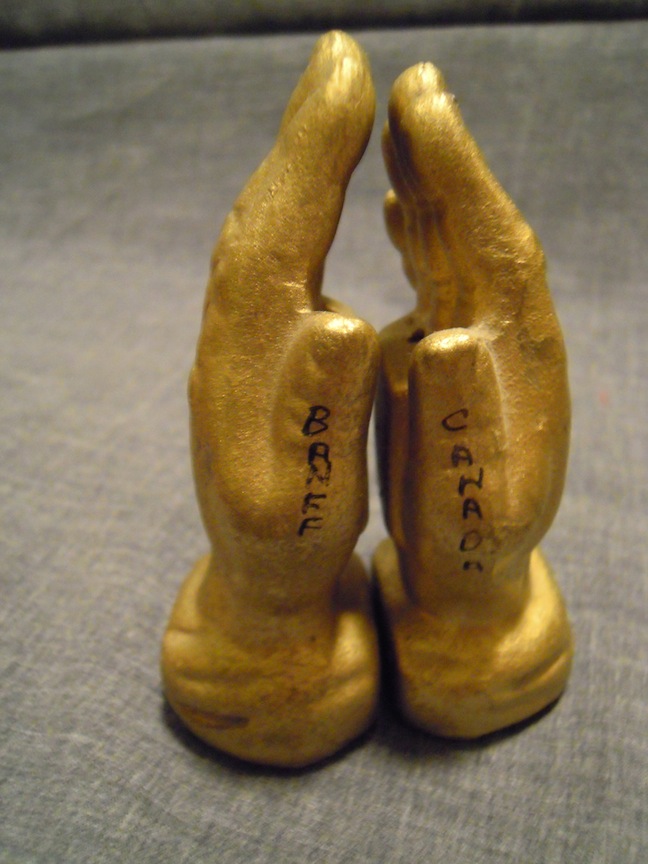 May God bless Banff Canada, despite it being ever so gilty.

You might, ask, though where the salt and pepper emerge from.  The answer becomes clear if we look at the shakers from another angle: 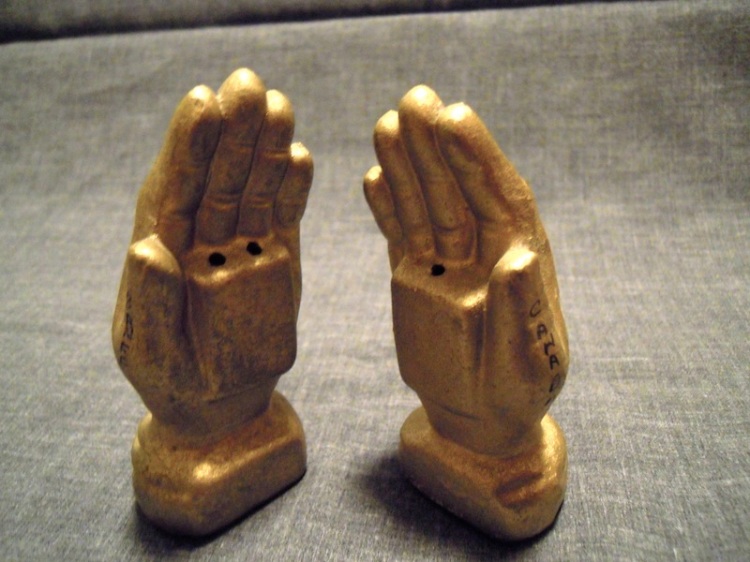 In order to accommodate the seasonings, the palms are weirdly protruded and box-like–as if the hands were palming a miniature deck of cards.

When I began this blog, Skip Shand, an old friend from my days as an undergraduate at United College (now the University of Winnipeg) many decades ago, asked, “Have you found a left-handed S&P? Or a right-handed, for that matter?”  I responded by showing him pictures of this set, both left-handed and right-handed.  Skip was asking because back in the day, one of the many eccentricities of one of our professors, Victor Leathers, was a collection of moustache cups–cups with a bar close to the rim on one side so that men drinking from them could keep their moustaches dry.

Once, as Dr. Leathers proudly showed me his collection, I noticed that he didn’t have a single cup that would be of any use to me as a left-handed person; all the moustache-protecting bars were oriented in such a way that they would be on the top of the cup if you held the handles in your left hand.  He suddenly became very flustered and clearly annoyed with me.  Apparently it had never before occurred to him that his collection might be incomplete in this way, and it really distressed him.  A few weeks later, he called me aside and proudly pointed to his collection again. “Notice anything?” he asked.  It took me a while to realize that there was, indeed, a new addition: a left-handed moustache cup.

I guess Skip is right.  This salt-and-pepper collection officially places me firmly in the ranks of Victor-Leathers-like eccentrics. I already even have the left-handed one.